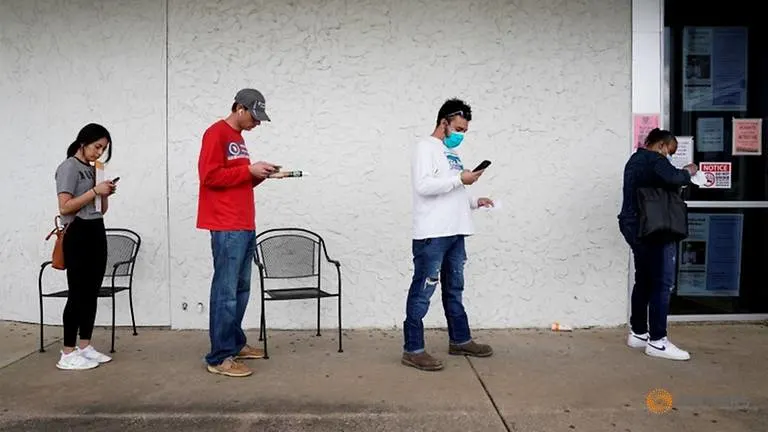 HomeEconomyWhat will the US economic recovery look like?
EconomyUSA
admin2 years agoMarch 6, 2021no commentNo tags
301views

WASHINGTON: The US economy is rebounding faster than expected from the COVID-19 recession, outperforming the most pessimistic estimates. But some areas remain largely shut down. So what will recovery look like?

HOW FAST WILL THE ECONOMY GROW?

The International Monetary Fund estimates the GDP of the United States will expand by 5.1 per cent this year, after contracting by 3.5 per cent in 2020 as the pandemic forced lockdowns that shuttered businesses nationwide.

But economists think the growth rate could accelerate further.

The nearly US$3 trillion in government stimulus programmes last year, including a US$900 billion measure approved in late December, were key to helping the US economy bounce back.

And Congress is moving toward approving President Joe Biden’s US$1.9 trillion rescue package, which will provide more support for businesses, families and state and local jobs.

Federal Reserve Chair Jerome Powell acknowledged growth could hit 6.0 per cent, while private forecasters like Gregory Daco of Oxford Economics said it could break 7.0 per cent.

The quick recovery has raised concerns that price increases could spiral higher, but Powell tamped down those fears, saying inflationary spikes in coming months are unlikely to last.

And the Fed has pledged to keep interest rates low until employment recovers and inflation stays above 2.0 per cent for some time.

WHEN WILL THE JOBS COME BACK?

As businesses were able to reopen and adapt to new COVID-19 restrictions, the country regained about half of the 20 million jobs lost in the early weeks of the pandemic.

Many of the remaining 10 million jobs are in the hardest-hit service sectors like hotels and restaurants – losses that fell especially hard on black and Hispanic workers.

And millions more have seen their hours cut or have left the labour force entirely, including large numbers of women who are taking care of children.

Those jobs and hours likely will not come back until the vaccine rollout reaches a critical mass of Americans, allowing people to resume normal activities without fear so businesses and schools can fully reopen.

The official unemployment rate – known as U-3 – hit 6.3 per cent in January, a dramatic worsening from 3.5 per cent a year earlier. For Black workers the rate was 9.2 per cent.

But when including individuals who have been discouraged from looking for work, or who are working part-time but want a full-time position, the broader U-6 rate was 11.1 per cent.

“The aid and stimulus are critical to bridging COVID-tainted waters, stemming employment losses … and priming the pump for a more robust recovery once social distancing measures are lifted,” economist Diane Swonk of Grant Thornton said.

WHICH SECTORS ARE REBOUNDING FASTEST?

The housing market, strong before the pandemic, paused only briefly before roaring back hotter than before.

Fueled by rock-bottom mortgage rates – and with remote work perhaps starting a trend of people moving out of congested areas –sales of new and existing homes have jumped about 20 per cent above the pre-pandemic level.

But supplies have fallen as homebuilders struggle to keep up with demand, driving prices higher.

Manufacturing, too, has recovered steadily since last summer, although output remains below where it was in early 2020.

And even as consumers have been forced to curtail activities, they have opened their wallets to spend freely on autos, electronics, furniture, and building and gardening supplies.

Online retailers have been the big winners, with a sales increase of just under 30 per cent over the year.

WHERE IS THE DAMAGE STILL VISIBLE?

The most visible impact of the recession is in the travel, hospitality and entertainment industry, which likely will come back to life quickly once people are able to take vacations and enjoy concerts, movies or plays.

But economists have warned about the potential for more permanent scars on the economy in the wake of the pandemic.

Thousands of shops and restaurants have closed permanently, and there is a risk of a wave of bankruptcies if the recovery doesn’t come soon enough for some heavily indebted firms.

State and local governments, which typically cannot borrow to finance their operations, are facing the possibility of slashing teachers, police and firefighters from the payroll to compensate for massive relief spending.

And homeowners and renters currently are protected by moratoriums on foreclosures and evictions, but their fate will depend on what happens to their past-due mortgage and rent payments once those moratoriums expire.

“We must continue to provide economic support to our citizens, creating a bridge to the end of the pandemic,” US Treasury Secretary Janet Yellen said this week.