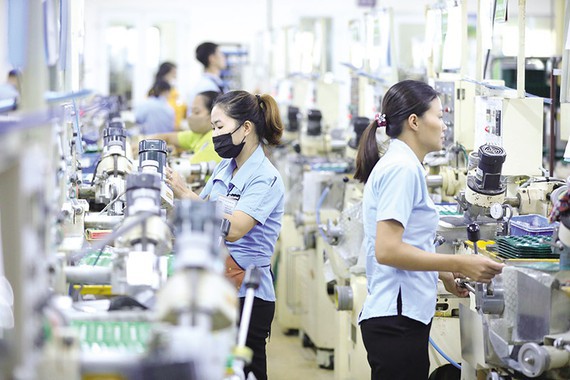 As much as US$5.46 billion worth of foreign direct investment (FDI) was injected into Vietnam as of February 20, equivalent to 84.4 percent of the figure recorded in the same time last year, according to the Ministry of Planning and Investment.

As many as 126 foreign projects were granted investment licenses with total registered capital of $3.31 billion, a year-on-year fall of 33.9 percent.

Meanwhile, 115 existing projects adjusted their investment capital with a total additional sum of $1.61 billion, or 2.5 times higher than the same time last year.

Capital contributions and shares purchases by foreign investors stood at $543.1 million, down 34.4 percent.

Foreign investors pumped capital in 17 sectors, with processing and manufacturing holding the lead with over $3 billion or 55.7 percent, followed by power production and distribution with $1.44 billion (26.5 percent), real estate $485 million, and science-technology nearly $153 million.

Japan topped the list of 46 countries and territories landing investment in Vietnam, with $1.64 billion, equivalent to nearly 30 percent of the total. Singapore came second with $1.07 billion (19.6 percent), and the Republic of Korea third with $1.05 billion (19.3 percent).

The ministry said the southern province of Can Tho lured the lion’s share of FDI with $1.31 billion, accounting for 24.2 percent of the total. Hai Phong city was the runner-up since it attracted nearly $918 million, or 16.8 percent. Bac Giang came third with nearly $573 million (10.5 percent).

So far this year, the foreign-invested sector has earned $38.07 billion from exports, up 34 percent year-on-year, and making up 76.1 percent of the nation’s total export turnover. At the same time, it spent $31.6 billion on imports, up 31.2 percent year-on-year, and accounting for 66.6 percent of the country’s total import value. That resulted in a trade surplus of nearly $6.5 billion.