HomeFinanceAmsterdam ousts London as Europe’s top share hub, taking trading back to where it all began
FinanceUK
admin2 years agoMarch 5, 2021no commentNo tags 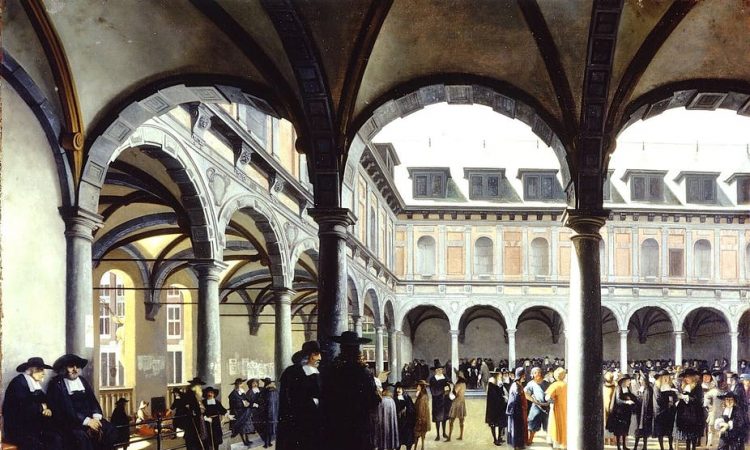 Amsterdam has usurped London to become Europe’s biggest hub for trading shares. It is quite a shift for a city that was fifth behind Paris, Frankfurt and Milan only two months ago, while for the UK this is one of numerous recent developments that highlight the downsides of leaving the EU. So how did this happen, and where do things go from here?

First a bit of history. At the beginning of the 17th century, the financial centre of the world was not London, New York or Tokyo. It was an exchange building built by merchants on the River Amstel, Amsterdam. This was the time of the Dutch Golden Age, when its science, culture and commerce were among the most celebrated in the world.

While share certificates had first been issued in 1288 when the Swedish copper mining company Stora granted the Bishop of Västerås 12.5% ownership, it wasn’t until the early 17th century that organised stock-trading began to emerge.

It happened first in Amsterdam when the Dutch East India Company or Vereenigde Oostindische Compagnie (VOC) issued shares to the public for the first time. This was none other than the world’s first initial public offering (IPO), and provided the capital to fuel the growth of this trading company to become one of the largest multinationals of the era. At its peak, the VOC was worth more than Apple, Google and Facebook combined.

Two geographical factors played an important part in Amsterdam becoming a major financial centre. A significant portion of the famously flat Netherlands used to be submerged, which meant the Dutch were used to loaning money to fund land reclamation projects. The Netherlands was also heavily urbanised, with a large number of people available and willing to invest their money.

Formal futures markets, which allow people to bet on the future price of certain assets, also appeared in Amsterdam during the 17th century, reflecting the growing sophistication of financial activities in the city. The most notable centred on the tulip – VOC ships carried these flower bulbs into the country from places like Turkey. As prices for some bulbs reached extraordinarily high levels and then dramatically collapsed, the “tulip mania” is generally considered the first recorded speculative bubble in history, although the trading was not as irrational as usually thought.

The rise of London

Despite the early Dutch dominance in financial trading, organised stock trading really took shape with the advent of the Joint Stock Corporation Act in the UK in 1844. Coupled with the industrial revolution, this spurred financial activities to grow in London.

Locals and foreigners started making investments, which enabled the UK to support immense capital requirements during the industrial revolution and was integral to the sustained productivity and welfare improvements that ensued. Other European cities later also developed their own financial activities, driven by an incredible expansion of multinational trade.

But what really made London a magnet for global financial activity was the “Big Bang” of 1986. Until then, the city’s stock exchange was limited to relatively small partnerships of stockbrokers, market makers and the like.

But on October 27 1986, sweeping reforms abolished various constraints on financial transactions and competition, opening trading to a range of new actors, including foreign ones. The City of London turned into a global financial powerhouse, and would go from strength to strength for the next 35 years.

Then came Brexit. The trade deal agreed between the UK and the EU on Christmas Eve did not cover financial services. For now, London’s financiers have been barred from certain activities such as trading euro-denominated shares and bonds, which has moved mostly to Amsterdam as a result.

Amsterdam is emerging as the winner because the city hosts the operational headquarters of the stock exchange Euronext. Euronext’s origins can be traced back to the founding of the Amsterdam Stock Exchange by the Dutch East India Company and it has been the largest stock exchange in Europe for some time. It was always likely to benefit when London left the single market. In January an average of £8.1 billion of shares a day were traded in Amsterdam, compared with £7.6 billion in London.

To continue as a global powerhouse, the City of London is hoping the UK and EU regulators can agree on “equivalence”, which is a system that the EU uses to grant domestic market access to foreign firms in certain areas of financial services. But the prospect of a breakthrough agreement looks slim, especially as the EU is eager to capture a greater share of a market which London has dominated for so long.

While the lasting effects of Brexit on London probably won’t be known for years, the first day of business after the UK’s departure from the single market was a symbolic turning point. Public data on January 1 showed that London lost almost 45% of the usual volume of stock. Besides shares and bonds, other affected markets include carbon trading, with a €1 billion (£880 million) in daily volumes also moving to the Dutch capital.

Clearly, Europe’s dependence on British finance is no longer a given. There has been a steady trickle of financial institutions moving from London to other European capitals since the UK decision to leave the EU. As far back as October, it was reported that financial services firms operating in the UK had moved around 7,500 employees and more than £1.2 trillion of assets to the EU. Of the work that is shifting, it looks like a carve up: asset management to Dublin, banking to Frankfurt, and securities trading to Amsterdam.

Four hundred years after the dawning of the first era of Dutch financial pre-eminence, Amsterdam is suddenly the continent’s home of share trading once more. It will be interesting to see how the situation develops in the coming months.