Today gold futures, basis the most active December 2020 contract flirted with $2000 per ounce, when it traded to an intraday high today of $2001.20. As of 4:53 PM EDT the December contract is currently fixed at $1,977.40 which is a net decline of a $1.20. There were both positive and negative technical indicators when we look at today’s price activity, and specifically focus upon the range.

Today’s trading range contained a higher high than yesterday, a higher low than yesterday, and gold closed above its opening price. These three facts are technically bullish for current gold pricing. Gold futures did trade above $2,000 per ounce but was unable to maintain that price point. This indicates that there is still resistance at that historical number. Technical traders are looking for gold to close above $2,000, and form a base above that price point. That would indicate the continuation of short-term bullish market sentiment. While interim and long-term market sentiment remain extremely bullish. 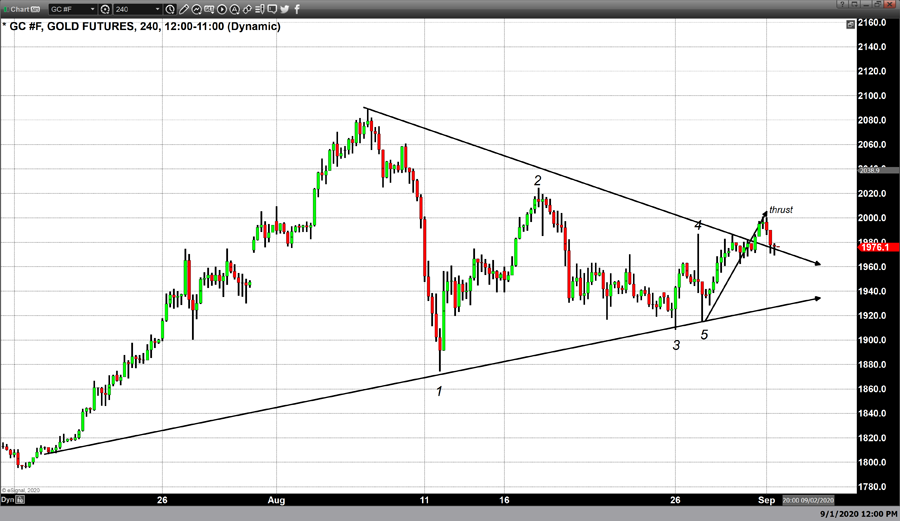 According to MarketWatch, Ross Norman, chief executive officer of precious-metals news and information provider Metals Daily said, “The market is looking to retake the $2,000 level in the near term and will be eyeing recent all-time highs.” He also told MarketWatch that, “The biggest vulnerability to gold is a correction in the equity market which could prompt short term selling in gold to fund margin calls. Physical demand remains brisk with retail investors joining central banks and institutional investors in acquiring the yellow metal.”

Overall, the majority of analysts including myself remain extremely bullish due to the recent change in the Federal Reserve’s monetary policy. Specifically, their mandate to allow inflation to move above its former target of 2% annually indicates the Fed’s willingness to let inflation heat up so that they can focus upon job growth in the United States. In the past the Federal Reserve has juggled with a dual mandate of maximum employment and an inflation rate that does not exceed 2% a year. By rebalancing their inflation rate to a higher level, they are putting their emphasis on maximum employment growth over inflation.

Gold has always been considered an inflationary hedge, and in this particular instance higher inflation will result from the massive and continuing accumulation of the Fed balance sheet. Currently the Federal Reserve has been purchasing treasuries, mortgage backed securities and corporate bonds to the tune of $120 billion each month. Prior to the pandemic the Fed was able to reduce their massive $4.5 trillion in assets to approximately $3.7 trillion.

According to American Action Forum tracker as of August 26 the Fed’s balance sheet has swelled to approximately $7 trillion. According to Thomas Wade director of financial services policy, “The development of quantitative easing as a go-to tool for the Fed in times of crisis has led to an unprecedented focus on one of its traditionally unremarkable aspects – the Fed balance sheet. Just as with any other firm, securities that the Fed purchases are considered assets and therefore are represented on the Fed’s balance sheet. This therefore is the most reflective guide of the state of quantitative easing and, by extension, the degree to which the Fed has deemed it necessary to intervene in the economy.” 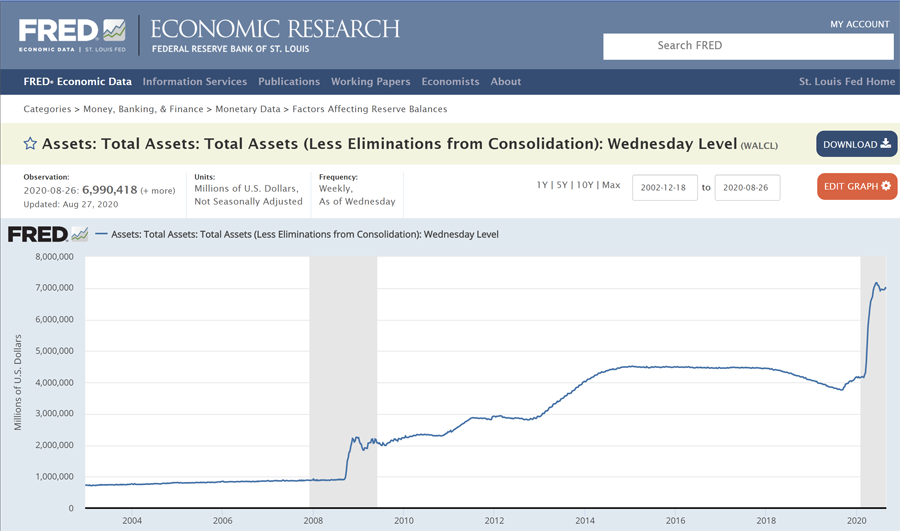 The chart above was created by the Federal Reserve Bank of St. Louis and shows the accumulation of assets by the Federal Reserve since 2004 up until August 26, 2020. It clearly shows that the Federal Reserve is willing to do whatever is necessary to stabilize the economic contraction and to foster economic growth. The net result of this action almost certainly will be continued U.S. dollar weakness which in it of itself will create bullish tailwinds taking gold to higher pricing.

admin2 years agoNovember 26, 2020
205
BY: REUTERS CAIRO – Egypt has awarded 82 exploration blocks to 11 companies in an international bid round for mineral exploration,...