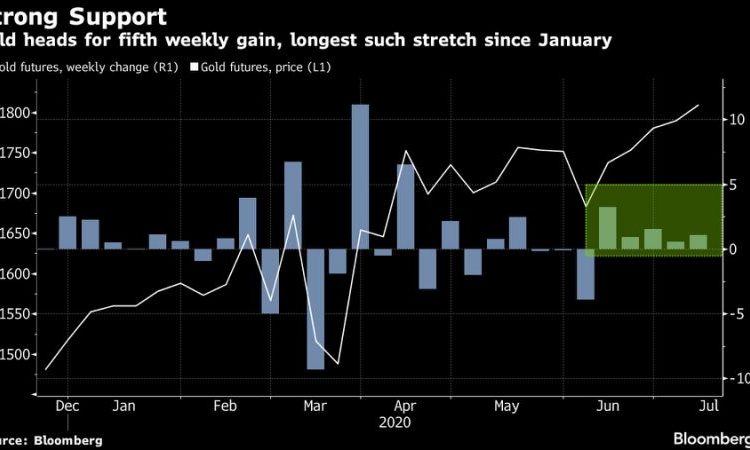 (Bloomberg) — Franco-Nevada Corp. will do at least $500 million in streaming and royalty deals in mining this year, and a lot more if base-metal producers proceed with several larger financing deals in the $500 million to $1 billion range.

That’s the view of the Toronto-based company’s chairman, David Harquail. In an interview, he said there are “a number” of large base-metal companies considering selling big precious-metal streams on their assets.

“They’re serious enough that they’ve gone through processes with investment bankers to solicit interest,” Harquail said. “Whether they get over the transom, or they pull the trigger, that’s at the discretion of the seller.”

Streaming companies provide upfront payments to miners in exchange for the right to buy metals at a discount in the future. With a market value of about $27 billion, Franco-Nevada also does royalty agreements, tying portions of production to land titles.

The firm managed to secure a raft of big deals with producers of precious and base metals between 2014 and 2016, as the collapse of the commodities super cycle forced miners to sell streams on prime assets.

Although the current environment for streaming is nowhere near as good as it was back then — because miners have done a better job managing their balance sheets — there’s still a good pipeline of deals, Harquail said.

“The relative value of gold to copper is one of the most advantageous to precious-metals companies ever, so there’s a real financing opportunity for base metals companies, that may have a precious metals component,” to do streams, he said.

In May, Franco-Nevada struck a $100 million to $150 million deal with Brisbane-based SolGold Plc. Along with some smaller deals, the company has committed close to $200 million to date and expects to meet its average investment of $500 million to $600 million a year in 2020.

“Right now, on the precious metals side, we’re entering a bull market even for the junior companies,” Harquail said. “People are doing financings and they’re upsizing the financings.”

Franco-Nevada’s investors want the company to focus on precious-metal deals, he said, as gold continues its ascent. The pandemic has created some headwinds, mainly around doing on-site due diligence for new investments. But Franco-Nevada has been able to work around that with “installment deals” that are subject to doing that work once it’s safe.

The company’s biggest investment, in First Quantum Minerals Ltd.’s Cobre Panama mine, was shut for most of the second quarter but is now reopening.

Harquail said the possibility of supply interruptions in Chile or Peru is serious but that so far governments have treated mining as an essential industry. The company has a stake in Lundin Mining Corp.’s Candelaria mine in Chile.

So far, miners have been able to take advantage of their ability to control sites to contain the virus, he said. While Franco-Nevada doesn’t expect full production this year, he’s comfortable if assets are performing at 85% to 90% of optimal volume.

admin2 weeks ago
13
Source : insurancejournal.com France’s financial sector is now the most popular destination in Europe for U.S. backers, helping the country...

admin2 weeks ago
14
Source : cityam.com London has retained its crown as Europe’s most attractive city for foreign financial services investment as investors...

admin2 weeks agoJune 11, 2022
10
Russia’s invasion of Ukraine and its effects on commodity markets, supply chains, inflation, and financial conditions have steepened the slowdown...