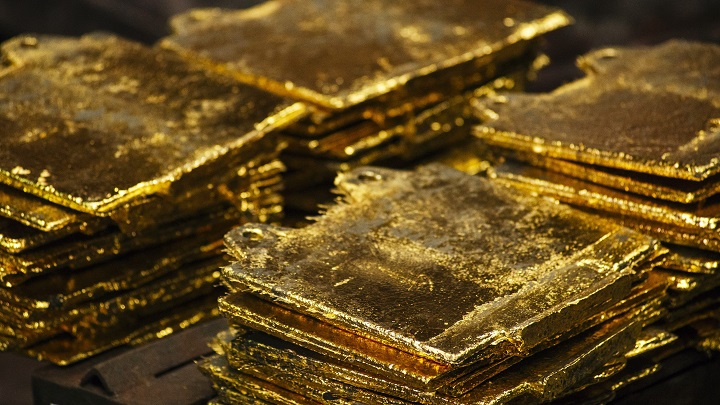 Solid gold slabs sit in piles following the electro refining process to remove impurities at the Rand Refinery Ltd. plant in Germiston, South Africa, on Wednesday, Aug. 16. 2017. Established by the Chamber of Mines of South Africa in 1920, Rand Refinery is the largest integrated single-site precious metals refining and smelting complex in the world, according to their website. Photographer: Waldo Swiegers/Bloomberg
HomeOpinionWhy Palladium Is Suddenly the Most Precious Metal
Opinion
admin3 years agoAugust 26, 2020no commentNo tags
150views

Palladium is now the most valuable of the four major precious metals, with an acute shortage driving prices to a record. A key component in pollution-control devices for cars and trucks, the metal’s price doubled in little more than a year, making it more expensive than gold.

It’s a lustrous white material, one of the six platinum-group metals (along with ruthenium, rhodium, osmium, iridium and platinum itself). About 85% of palladium ends up in the exhaust systems in cars, where it helps turn toxic pollutants into less-harmful carbon dioxide and water vapor. It is also used in electronics, dentistry and jewelry. The metal is mined primarily in Russia and South Africa, and mostly extracted as a secondary product from operations that are focused on other metals, such as platinum or nickel.

2. Why is it getting more expensive?

Supply hasn’t responded to growing demand. Usage is increasing as governments, especially China’s, tighten regulations to crack down on pollution from vehicles, forcing automakers to increase the amount of precious metal they use. In Europe, consumers bought fewer diesel cars, which mostly use platinum, and instead chose gasoline-powered vehicles, which use palladium, following revelations that makers of diesel cars cheated on emissions tests.

admin2 years agoSeptember 5, 2020
150
The rally in gold prices has come at a time when technology stocks have led the rally in equities, over...