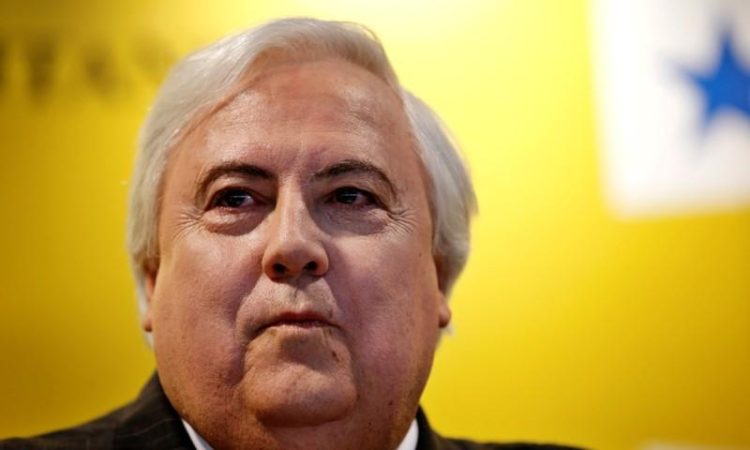 MELBOURNE (Reuters) – Australian mining magnate Clive Palmer has renewed a push to develop a new coal mine in Queensland state, close to a controversial mine under construction by India’s Adani Enterprises.

Palmer’s Waratah Coal applied to Australia’s Department of Natural Resources on Oct. 4 for a 35-year mining lease in the Galilee Basin, a new coal region that won the green light this year for development.

The application signals a resumption in development planning for the mine, which was first proposed in 2011 but which has been on ice in recent years. A rail line by Adani is expected to open the basin with transport to the coast, making other coal projects in the region more viable.

Australia is the world’s largest exporter of coal, which is expected to account for about A$57 billion ($39.2 billion) in exports this year, behind top export iron ore at A$81.5 billion.

Adani’s Carmichael coal mine was approved by the state government after it played a part in the surprise federal election victory for the Liberal-National coalition in May, which benefited from a swing in nearby regional electorates with high unemployment.

Palmer himself stood for election and while he did not win a seat, he spent A$60 million on political advertising mainly targeting the Labor party which had environmental concerns about the Adani project.

Palmer returned to the Forbes rich list this year after a court ordered China’s CITIC to pay him A$200 million in iron ore royalties annually until 2047 for his role in developing its Sino Iron mine in Western Australia.

admin4 months agoMarch 5, 2021
54
SINGAPORE - Those who believe that economic integration is key for global recovery must work together to counter protectionism, Trade...

admin4 months agoMarch 6, 2021
45
German Finance Minister Olaf Scholz described the U.S. move as a major breakthrough that could pave the way for a...

admin4 months agoMarch 5, 2021
47
AMSTERDAM (Reuters) - International trade recovered at the end of 2020 to pre-coronavirus levels, making up for the sharp hit...

admin4 months agoMarch 6, 2021
46
Morocco stands out in the field of country branding, topping the Africa ranking of the “Country Brand Awards” for the...