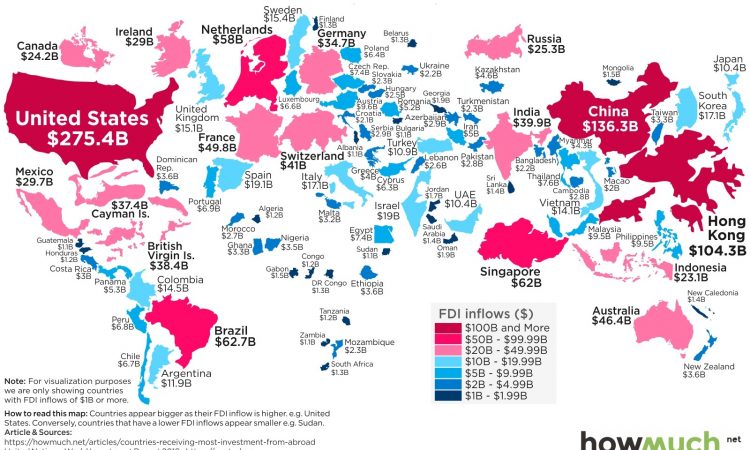 For many of the world’s companies, the best investment opportunities aren’t always located within their own domestic borders.

Whether it is building a new Starbucks store in Abu Dhabi or Tata Motors acquiring Land Rover, foreign direct investment (FDI) is a measure of how much business capital is flowing in and out of countries.

In 2017, total foreign direct investment was $1.43 trillion globally, and today’s map from HowMuch.net breaks down where this money went by country.

The Countries Getting FDI

The following data comes from a recent report by the United Nations Conference on Trade and Development.

At a high level, here is where foreign direct investment flows went, based on the type of economy:

Most money flows out of wealthier countries, and it flows into both developed and developing nations.

Foreign direct investment is often considered a win-win that brings new capital and jobs to developing nations, while simultaneously creating opportunities for corporations and investors.

Further down the list, things become more interesting. Tax havens such as the British Virgin Islands and the Cayman Islands rank higher than developed economies like Canada, United Kingdom, and Japan, which don’t even come close to cracking the top 15.

Meanwhile, Brazil’s ranking in fourth place is also quite impressive with $62.7 billion of foreign direct investment inflows in 2017 – this is not a one-time thing either, since the economy had $58 billion of inflows in 2016 as well.

admin5 months agoMarch 5, 2021
70
As much as US$5.46 billion worth of foreign direct investment (FDI) was injected into Vietnam as of February 20, equivalent...

admin5 months agoMarch 5, 2021
74
The Dhaka Chamber of Commerce and Industry on Thursday urged the government to adopt a national strategy for the foreign...

admin6 months agoFebruary 9, 2021
85
UN figures show China was the largest recipient of new foreign direct investment in 2020, overtaking the US for the...

admin8 months agoFebruary 9, 2021
112
London has been rated the world’s most “magnetic” city for the ninth consecutive year. Rating is based on its ability...