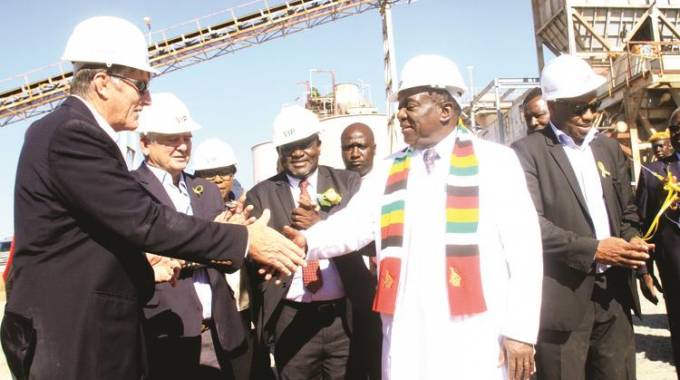 Farirai Machivenyika and Levi Mukarati
President Mnangagwa yesterday officially reopened Eureka Gold Mine in Guruve, which is expected to produce at least 1,5 tonnes of gold annually when it reaches full production capacity in the next 18 months. The reopening of the mine follows a $60 million capital injection by Delta Gold.

The mine — which had ceased operations 15 years ago — will employ at least 400 people when operating at maximum capacity.

In his address, President Mnangagwa said Government’s thrust was to partner investors to exploit the country’s resources for the benefit of communities and the nation.

“Here in Guruve, the resources that are underground are yours,” he said.
“But if we do not exploit them they will remain underground while you remain poor.

“We, therefore, need investors that will assist us exploit those minerals so that we develop as communities and as a nation. The resources can only be useful to us if they are exploited.”

President Mnangagwa said reiterated that Government was focused on economic development more than politics.
He said the reopening of Eureka Gold Mine would contribute significantly to the country’s gold production.

“The reopening of the mine offers an opportunity for it to make its contribution to the nation’s gold output which is expected to reach 100 tonnes per annum in the next five years,” said President Mnangagwa.

“I urge you, therefore, to think big from the onset. There are now immense possibilities that are abound in the sector.”
President Mnangagwa urged the company to adopt new technologies to maximise output.

“Equally important is need to gradually increase the employment capacity of the mine and foster mutually beneficial relationships with communities around the area which you operate,” President Mnangagwa said.
He thanked the investors for the confidence they had shown in Zimbabwe.

“This injection of $60 million into the resumption of this mine bears testimony to the confidence that investors have in the bright future of our country,” said President Mnangagwa. “I want to thank Eureka Gold Mine shareholders and management for the effort that has gone into the project to date.

“This landmark event, together with the reopening of Shabani Mine, among others, is indeed evidence of my Government’s resolve to leverage on our country’s natural resources endowments to grow our economy, create decent jobs and improve the standard of living of our people throughout the country.

“To this end, allow me to assure all investors that under my Government, investments are safe in Zimbabwe.”
President Mnangagwa said Government would continue to facilitate exploration and establishment of new mines, re-open closed ones and increase capacity utilisation.

“Between now and construction, we will employ 250 to 300 and then 400 when we are in full production and these are the full staff complement figures,” he said. “We will start off with a target of about 150 kilogrammes of gold per month and as we go deeper about 200 plus per month.

“We are hoping to be running at maximum within 18 months. Two pumps arrived this week to remove the water from the pit and four more pumps are on the way. We are going to get additional power reticulation to the pit so that we can power them up. We are hoping to start that within two weeks and three months later we will be ready for the miners to start operations.”
President Mnangagwa donated 20 computers each to Guruve and Chimanikire primary schools.

admin11 months agoMarch 5, 2021
140
The Dhaka Chamber of Commerce and Industry on Thursday urged the government to adopt a national strategy for the foreign...

admin12 months agoFebruary 9, 2021
177
UN figures show China was the largest recipient of new foreign direct investment in 2020, overtaking the US for the...

admin1 year agoFebruary 9, 2021
215
London has been rated the world’s most “magnetic” city for the ninth consecutive year. Rating is based on its ability...