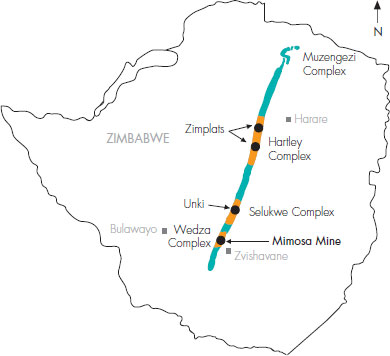 ZIMBABWE is in the dark about its vast mineral deposits as no geological survey has been conducted to assess the country’s untapped mineral resources, a senior mines official has said.
The director of the Zimbabwe Geological Survey in the Ministry of Mines, Mabasa Hawadi, said only 60 percent of the country had been geologically mapped in detail with the remainder being a grey area for exploration.
Hawadi was speaking at the Sixth Zimbabwe Mining and Infrastructure Development Indaba in Harare on Thursday.
He said no oil deposits had been detected so far but confirmed vast untapped deposits of coal-bed methane gas, mainly in the Gwayi area in Lupane in Matabeleland North.
Scott Macmillan, the managing director and co-founder of Invictus Energy Resources, said hydro-carbon explorations were on the rise in sub-Saharan Africa with six of the top 10 global resources found on the continent as of 2013.
“More than 500 companies are doing these explorations in Africa. These are set to unlock more economic development opportunities in the continent and create jobs,” said Macmillan.
He said several countries in the region such as Botswana, Namibia, Tanzania, Uganda and Kenya were busy doing explorations aimed at unlocking new opportunities and urged Zimbabwe to position itself for that investment boom.
“Zimbabwe is competing for explorations in the regional beauty contest and its key for us to increase exploration activity to unlock this potential revenue. This country has world class coal-bed methane gas and stands to benefit immensely from the resource,” said Macmillan.
Geological Associates of Zimbabwe chief executive officer, Paul Chimbodza, said the country should start working on beneficiation and value addition plans on gas to ensure increased earnings from by-products of the resource as opposed to exporting it in raw form.
He said Africa was not utilising the bulk of its gas reserves despite abundant resources.
“Increased exploration for natural gas is paramount and we believe the volumes are too big for the Zimbabwean market hence we need plans for beneficiation.
“Potential markets are in Hwange for power generation, Pande-Temane gas pipeline to South Africa and Sable Chemicals fertiliser manufacturer, which currently is the biggest consumer of electricity,” said Chimbodza.Advertisement

“The global scenario is that countries are slowly moving away from coal to clean energy sources that produce power at cheap rates.
“Statistics indicate that 18 million vehicles in the world have been designed to use gas as fuel and this could also solve our fuel problems. It will actually cut by half our fuel costs.
“It therefore makes sense for Zimbabwe to embark on an exploration campaign.”
However, the experts noted the huge costs of conducting explorations and the long-term nature of developing the projects.
They urged the government to address the legislative, fiscal and licensing bottlenecks to allow for increased participation and partnership between public and private players.

admin11 months agoMarch 6, 2021
87
“The semiconductor topic is a very serious one because the whole industry is affected,” Oliver Blume, chief executive of Porsche,...

admin12 months agoMarch 5, 2021
95
The UK economy is like a "coiled spring" ready to release large amounts of "pent-up financial energy", the Bank of...

admin1 year agoDecember 24, 2020
98
Prices have already surged to highest in more than six years  Inflation fears are drawing investors back to resources sector...